A sense of humour

My oldest daughter is often challenged by her homework - there's way too much for a 6-year-old, but the school gets good results and we don't want to rock the boat, at least not just yet. The latest batch has what I presume is an exercise related to imagination.

The brief being to create a monster, describe its likes and attributes, and draw a picture. The most important bit, the one daughter 1 was most challenged by, giving said monster a name.

It should be easy, it's only a name. Right? But we'd only recently finished with the weights and measures homework, moving together throughout the house finding objects for me to illustrate what things weigh. Brain full.

So, a name for the monster? She didn't know. So I explained what it must be like being one. "Just imagine what life must be like as a monster," I said. "Everyone's out to get you simply because you're going round the countryside eating small children and sheep. And, do you know, that's wrong."
She looked at me for a moment. And then looked again.

I continued "Imagine all you want is a quiet life, to just go down to the shops and buy some nice food, go home at the end of the day and sit down with a cup of steaming hot chocolate. And you can't because the villagers are out to get you, stab you and set you on fire."
At this point daughter 1 opened her mouth and said something very appropriate: "?"

"Flib-blob-floo-boo," or something very close, was her reply. I'm still not sure if as an answer or because I'd melted her brain. But I pushed for an answer - it was past her bedtime.

"How about Buttercup?" I asked. "Just because it's a monster doesn't mean it has to have a horrible name like Raaarg or Snaarlf."

"No." came the emphatic response.

"Snowdrop?" was met with a giggle. On our way now, I hoped, but I'll spare you the despair I felt when each subsequent pick was rebuffed. Close to giving up or getting her mother to help I gave it my best shot: "Jim-Bob?" (her name) "or Ag-Ack-Ack?" (her younger sister's name.) Incidentally I'm not in the habit of divulging my family's names publicly. Apart from the cats.

My patience wearing thin, inspiration arrived: I asked her to pick a letter of the alphabet to start the name off.

"i" arrived quickly, much to my relief.

And here she is: 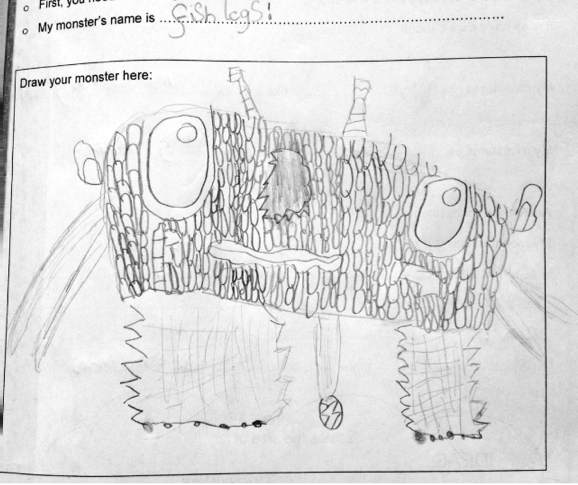 I have what's been called a well-developed sense of humour. Ok, I'm putting a positive spin on it. Being frank, a lot of people think I'm a bit weird. And some think I'm a lot weird. And, do you know, I have no problem with that.

I do have a problem with the dangly bulbous-ended thing between Fishlegs' legs. I dare not ask, especially as I made the assumption a girl would pick a female monster.