I was wrong. The 139th White House Easter Egg Roll event went ahead with the Trumps in attendance. I guess I'm simply not in tune with a lifestyle which allows separate taxpayer-funded flights for the President and the First Lady, from Washington DC and New York City, to Florida for a couple of days. And then back again.

Some people will point at this one event, ignore the history and the numbers, and assume the world is returning to normal. Hey, the First Lady might have organised and supervised the planning of the Egg Roll.

Others will watch the following video and groan:

Or read this article and groan:

You know, I am enjoying reading stuff from The Washington Post. It makes a nice change from, er…

The Easter Bunny visited, distributed cunningly-hidden chocolate eggs throughout the Turner residence and left, but not before disposing of the Cadbury Easter Egg Hunt pack cardboard in our card and paper recycling box.

How very responsible; how very practical given what I'd imagine would be the total worldwide visit packaging impact on the Easter Bunny's home recycling regime and the local authority's complaints on bin emptying day.

How very odd it felt explaining this to the nearly 10-year-old daughter who found the card despite someone's* lackadaisical efforts to 'bury' it the night before.

With 99% of the votes counted and the totals being 51.4% for, 48.6% against, the Turks elected to become a dictatorship.

Like other recent close tallies, I've the feeling this won't end well for the average citizen's belief of what democracy is.

The Trumps flew to Florida on Friday, in separate jets. It's looking as though they'll miss the annual Easter Egg Roll, a 138-year-old tradition, will be somewhat curtailed in scope. A shame.

From the second article:

"Since 1878, the Easter Egg Roll has always been coordinated by the first lady. Seeing as how Mrs. Trump not only lives 200 miles away from the White House, but has yet to bother putting together an official staff, this year’s event, like Trump’s numbers in the popular vote, is expected to underperform bigly."

Is anyone taking bets it'll be recorded as the most successful event ever? Forget tradition, tradition is not for those looking to the future! Forget history, history is tor those who would read books. Books, books are for…

I had intended to write about the passing at 117 of the world's oldest person, Emma Morano, but my attention spa…

Yeah. It's very unlikely there's anyone else alive born in the 1800s, the nineteenth century, the end of the Victorian era. Imagine the social, the technological change she'll have seen living through the entire 20th century. I simply cannot imagine the personal losses she'll have endured; every family member…

I'm having a profound moment here, not an epiphany as there's something quite logical about the effect of extreme age on statistics. No, mine is a sense of missing something.

There's a scene in one of the Lord of the Rings movies which brought to life something I'd never really considered in depth. The specific scene, though powerful, is unimportant here; what is is something seen in old, grand churches: statues side-by-side above stone tombs, once lovers, creators of life, holders of shared dreams, together forever in stone, mourned by fewer and fewer and then none as the passage of time takes those who once knew…

Yeah, sure it's a privileged few afforded such a luxury in death. The common man gets nothing likely to last even tens of years. The despots, the landowners, the moneyed classes of our history: immortalised.

Will the Trump era be looked back on with anything approaching warmth, a sense of a shared timespan, a belief of having achieved something?

Can I place a bet?

Incidentally, I have a bragging-rights-only wager with @texrat (Twitter), that the White House Press Secretary will last only until late August 2017. Randall thought he'd be gone roughly by the end of March. Not roughly, I think I mean approximately. Perhaps; I'm still suffused by Schadenfreude.

This time the experiment continues with sufficient ice cubes prepared to sink an ocea, er…

Drunk this time with a single, melted, ice cube. Precisely this one, well this half: 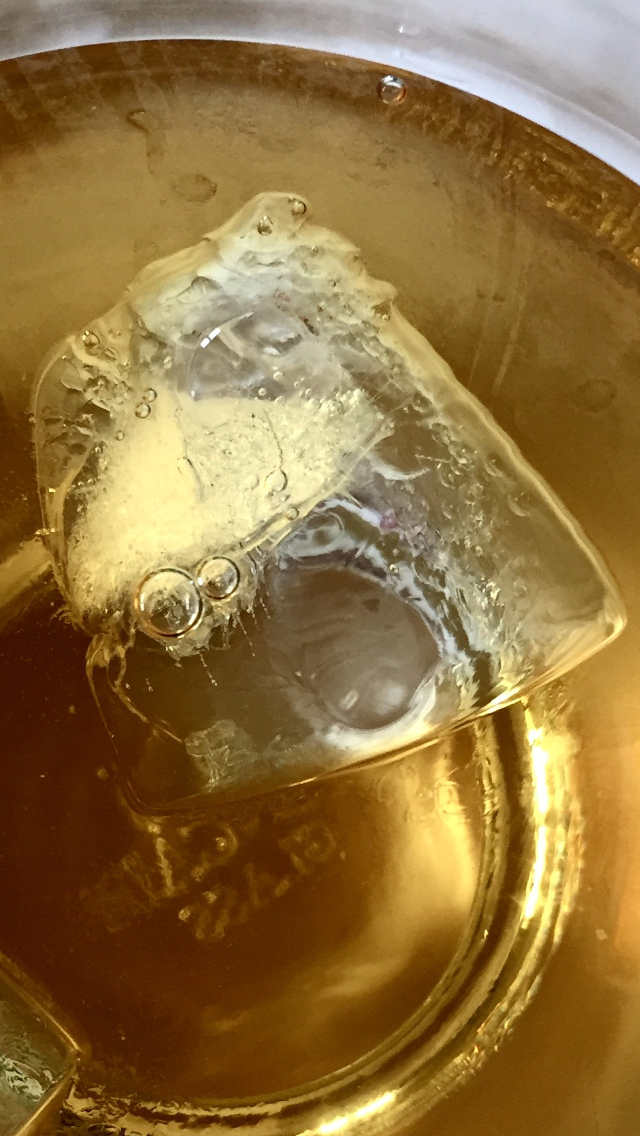 Verdict: hmmm… Clean, crisp, with an odd taste just before it starts to tingle my gums, and then it's back to…

It smells underwhelming still after the Maker's Mark, but I'm happy with the trade-off; it's still a warming, drinkable drink.

My view, 'Buffalo Trace' is a more rounded experience. Once this is done I'll of course try the 'Woodford Reserve' then the 'Bulleit' but thus far the shaggy quadruped gets my vote. A shame, I paid quite a bit more for this Four Roses than I expected I would when all this began. Not a complaint, far from it.

Nevertheless, to be continued…

I subscribed to the online editions of The Washington Post. Yes it's a US news company! At USD$19 for an entire year it was an easy decision. I live in the UK but haven't yet done the same for any other UK news organisation, apart from giving a few pounds to The Guardian (paywall-free.) Incidentally, both 'newspapers' are running very similar headlines today, very encouraging.

Yeah, sure I pay an annual Licence Fee to the BBC and read their news, watch their telly, but the reporting is often infuriatingly bland and airs weeks past the time I've already seen it elsewhere.

Where was I? Yes, one of the reasons I subscribed to the Washington Post was reporter David Fahrenthold's tenacious examination of Donald Trump's assertions that the President-to-be gave away millions to charity. What is certain is the majority of charitable donations were falsely recorded and that the work won Mr Fahrenthold a Pulitzer Prize for National Reporting. And the reporting of his humanity, non-superhero ordinariness, in connection with that glitter gun.

I'm conscious of drawing from perhaps a greater breadth of sources than most other people when formulating my position on often complex ideas. And often simple ideas. Last year I asked around and gratefully received suggestions for people and media companies from which I could draw a wide range of opinions. With hindsight I bit off more than I could comfortably chew and had to step away from the process.

I can't say I'm much wiser now but the perspectives I've gained have led me to a more balanced approach than you'd know by reading some of last year's blog posts, e.g. 'Regrexit' and 'Chainsaws'.

In public at least.

The Washington Post subscription includes (from the welcome email):

Joking aside I remember Martyn Lewis, a national UK news anchor saying he wanted to insert one 'feel-good' story into every bulletin. His rationale being that there's too much depressing news. At the time I agreed; now though it's entirely the wrong message to send to ordinary people. Given the magnitude of the worldwide change we're living through, I believe it's important to focus on the bad stuff.

There's one big problem with my current reasoning: if you make reporting so detailed that people don't want to watch they'll go to where the grass is greener, airbrushed, astroturfed… Yeah. Fairness, balance.

And finally, here's a link to a web page with a photo of a squirrel with big nuts:

For the avoidance of doubt as to my motives here at the end, Fark.com is my all-time favourite news-related site; the comment pages there are awesome. Awesome in a mainly US-centric, rounded but occasionally very unbalanced, good way. I pay them to remove ads.

/Potters about in the kitchen for a while and tries, but ultimately fails to, resist temptation…

Drunk neat again with it and me at room temperature: oh yes. Looking forward to dropping a freshly-frozen ice cube with pre-boiled cold water from the kettle in the next glass, because I know what I like.

Smells underwhelming still, but it's a warming, drinkable drink.

Has to be said: 'Buffalo Trace' is still my favourite whiskey, but this comes 'real close'.

An aside; maybe I should have swilled the Maker's Mark around in my glass and before leaving it to evaporate overnight, I miss those rich, extraordinary aromas.

Drunk neat with it and me at room temperature: oh yes. Looking forward to dropping an ice cube in the next, because I know what I like.

The bottle looks good, its contents are immediately accessible, most unlike the trials and tribulations of fighting my way into the over-designed Maker's Mark bottle. It both handles and pours well and pulling the cork seems positively luxurious in comparison.

Attempting to find a better Bourbon whiskey than 'Buffalo Trace' I've been asking around, and received what really do sound like good recommendations. For now though I'm bypassing Irish whiskeys (Bushmills Black Bush) in favour of the authentic Kentucky stuff.

Despite my long-winded, ultimately negative review of 'Maker's Mark' I really enjoyed the experience; it's not often I step outside my comfort zone and have the luxury of being able to analyse it at my leisure.

Ok, I've had one from each of the 3 groups in this Ask Men article. The old Turner palate favoured one from the 'high rye' group so what's where I'm heading again. Thanks to whoever suggested the 'Woodford Reserve' but it's unavailable here this evening on Amazon Prime Now.

Somewhere between 10pm and midnight today the doorbell will ring and my delivery of Four Roses Single Barrel whiskey, and cat food, will be handed over. After, that is, I prove that I'm an adult by scrawling my digital signature on the deliverer' phone.